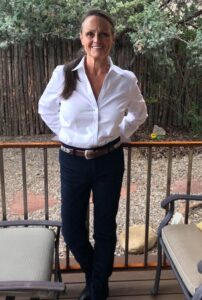 It’s not a coincidence that Kate Sweetser has the same last name as Cornelius Sweetser III, founder of the Sweetser organization. She is a distant cousin of the late philanthropist.

Kate’s brother Elliott began contributing to Sweetser in 2004 after visiting the Crisis Unit on the Saco campus with his children so they could learn more about their family heritage.

While in Maine visiting potential colleges for her daughter in 2008, they stopped by Sweetser to learn more about the organization. Following in her brother’s footsteps, she began contributing to the organization later that year. Kate has supported Sweetser every year since, and became a Cornelius Sweetser Heritage Society member in 2015 – generously including Sweetser in her estate plans.

Kate has made donations in memory of Cornelius Sweetser III and her father, who was a well-recognized Child Psychiatrist in New York. She has attended the annual Sweetser/KeyBank Sold on Kids Auction & Dinner, making a cross-country trip to show her support. Recently, she donated handmade face coverings for use by Sweetser clients and staff during the pandemic.

Asked why she is so supportive of Sweetser, she replied, “I would like to be a little part of the family for the kids of Sweetser going forward. I’ll take them if they will take me.” Another inspiration for her is to help families and individuals with substance use disorders and psychological challenges.

Sweetser was founded due to the generosity of Cornelius Sweetser III – the successful Saco businessman and civic leader willed, upon his passing in 1881, one-third of his estate to the Town of Wakefield, Massachusettss, one-third to needy relatives, and one-third to establish Sweetser in support of Maine children orphaned by the Civil War. Sweetser Trustees purchased the site of the Saco campus in 1915 and opened the Sweetser Orphan Asylum, later recognized as the Sweetser Home for Boys. Later, the Children’s Home of Portland, the Children’s Aid Society of Maine and Maine Home for Boys became a part of Sweetser, setting the foundation for the Sweetser we know today.

Kate and her brother Elliott are continuing the Sweetser family legacy of philanthropy. We are very grateful for her dedication and commitment to our mission.