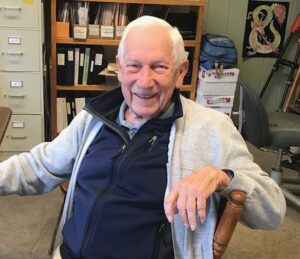 Paul Chamberlain’s first donation to Sweetser arrived in the mail in 1977 and his support has continued ever since!

During his many years of giving, Sweetser programs and services have grown considerably, but the mission has remained constant. Says Paul, “I have always been impressed with the things Sweetser does for children and families who need the help. Where would they be without Sweetser?”

Having been raised by another family on a farm in Greenland, New Hampshire, Paul can relate to the difficulties some families go through. In his early childhood, it was decided that Mr. Chamberlain would be placed with another family on a farm where they could provide for him. He remained on the farm for 15 years. Paul learned adversity and many skills on the farm, including a strong work ethic and to never give up. He developed a deep sense of appreciation for the family who raised him and places like Sweetser.

Mr. Chamberlain recently visited the Sweetser campus in Saco for the first time. He especially enjoyed visiting the school and seeing students learn hands‐on work experiences on the farm, reminding him of his youth. “I didn’t realize Sweetser was doing so many things for these children,” said Paul.

Sweetser is grateful to Paul for his continued interest and support. He became a member of the Cornelius Sweetser Heritage Society in 2017 in recognition of his longtime dedication and commitment.